Richard Myerscough's unique novels are written to captivate readers who relish dark, fast paced, exciting action-thrillers, that are sprinkled with a tad of gore.
****
I am proud to announce that in the fall of 2017, the University of Prince Edward Island had used
'Bat blood - The Devil's Claw' in their 'Creative Writing Masters Class'.
​****

​     In his Bat Blood series, a colony of carnivorous mutants kill in order to survival.  Doctor Scott, the head of the facility that inadvertently created the mutants, is stymied by the creatures' resilience.  Needing to contain his research, he enlists a small army of mercenaries to do his bidding.  They quickly find out that the creature's razor sharp claws, teeth and human-like intelligence are more than a match for their vast arsenal.  Despite major setbacks and a rising death toll, the doctor can still smile, for only he knows what is really going on.
​ 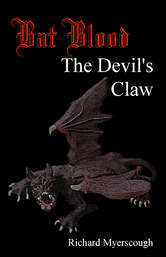 Bat Blood - The Devil's Claw is the first book in the Bat Blood series.  After a research facility is destroyed, the surrounding forest becomes an horrific war zone between intelligent winged mutants and a band of mercenaries hired by the man that created them.  When a mutant infects a young local girl, Sarah's cancer is cured and both sides discover that she holds the key to their future.

It is an edgy creature novel with an usual twist.  In an age when genetic scientists can use stem cells to  grow a human ear on the back of a lab rat (cross species), it is not hard to conceive that this field of research could go a lot further.  In the Bat Blood series they do.  Like most intelligent creatures, the mutants the scientists inadvertently produce are willing to fight and die in order to save their species.  With the novel written in such a way that the fears and emotions of both sides of the violent war are revealed, the reader will discover that no conflict is black and white, and neither side is pure good nor evil.

For more details about the book click on   ﻿Bat Blood : The Devil's Claw﻿


If you would like to read the first few chapters, go to ﻿Peek Inside of Bat Blood: The Devil's Claw﻿ ​
Now available via Amazon
kobo books 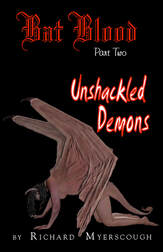 Bat Blood - Unshackled Demons    This novel is the second in the Bat Blood series.   As Part Two in the series, the ﻿﻿reader should read﻿﻿ ' Bat Blood : The Devil's Claw ' first, to avoid spoiling their enjoyment of reading part one later and get the full impact of this horrifying thriller.  In 'The Devil's Claw' Sarah started out as an intelligent and well adjusted girl.  In 'Unshackled Demons' Claraicy neither.  After mutilated bodies start to stack up, the elite soldiers assigned to capture her find that their own internal demons begin to surface.  As Claraicy continues to mutate, they sink to her level and no one knows who to trust.

From scenes that will make you squirm to an ending that will shock you, this thriller is written for readers that are looking for something edgy and uniquely fresh.

This 136,000 word, 456 manuscript page novel is available in hard and soft cover through Amazon, plus a host of other websites along with all e-books formats.

For a preview go to Peek inside of Unshackled Demons 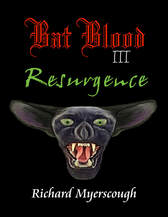 ​This novel begins at the end of Bat Blood - The Devil's Claw, and incorporates the ending of Bat Blood - Unshackled Demons.  With the mingling of characters from both novels, things get tense and the net widens.  The problem is, how many holes can the creatures find in the net.

To understand this novel, you will need to read both of the first two novels in the series.  The novel is 120 thousand words long, and both soft and hard covered books are currently no sale.  However ebooks are still forth coming.

Apart From The Bat Blood Series 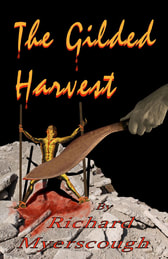 ﻿﻿﻿​The Gilded Harvest
​While contemplating the direction of the Bat Blood series, I ventured away and wrote - ﻿﻿﻿The Gilded Harvest﻿﻿﻿ . This book has cannibalistic scenes that will take you out of your comfort zone, and bring the art of post apocalyptic (75+ years afterward) survival to a frightening new level.

The earth's crust had completely changed.  The continents had split apart and the lack of oxygen had killed off almost all of the life forms in the oceans and inland seas.  With the topsoil and plant life scraped off the surface, those who survived had to adapt and hone their survival skills.

Without modern technology and machinery, man reverts back to clan warfare, where only the cunning and most ruthless survive.  Mercy had become a forgotten virtue.  As people are forced to leave their bomb shelters, they are not prepared for what they are about to face.  They find themselves in a hostile world where they are 'The Gilded Harvest'.

While you squirm in your seat, this book may make you wonder how far you would go in order to stay alive.
﻿﻿﻿

go to 'Peek inside - 'The Gilded Harvest'
kobo books

Venturing Into the Twisted World of
Murder - Mysteries

I wrote 'Author - A Murder With A Twist' as a challenge from my lovely partner Laurie and a co-worker Deana.  Even though it wasn't what I normally sink my teeth into, I accepted the challenge.

Even though I wrote it relatively quickly, (only eight weeks from start to publication, which was a vast mistake that I will never do again).  It was first released in April 2019 and was for the most part well received.  This encouraged me to reedit/rewrite it.  Slightly over one year later (May 2020), and countless editing, it blossomed from 45,000 words to 75,000 words.  This alone should tell you the amount of detail and substance the first edition was lacking, and why I will never rush another book to press ever again. 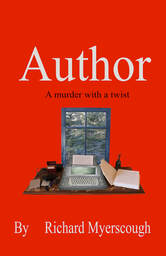 ​
Blackett Hill, a small community with no children wasn't on any map.  When a best selling author goes there for an unwelcomed book signing and is killed, its unusual residents are more than just alarmed.  They are frightened.
As Detective Douglas, a surly, stubborn police officer, investigates the murder, he finds the town's doctor blocking his every move.  When the entire town shuns him, his capable assistant Sgt. Ryan is caught in the middle.
With no clue what the murder weapon even is, and too many suspects, the officers have to resort to unusual tactics to unravel what they believe maybe the truth.  But nothing is what it seems, and karma has its own ideas.
'Author', is a murder mystery with more than just a twist.  When even the murder weapon can not be identified, the police need to dive into some unusual aspects of the publishing industry.  As the detective focusses on Roger Blackett, the man that owns the property that the town is built on, the gloves are removed.
A Peek Inside         Author - A Murder With A Twist
purchase through amazon.com